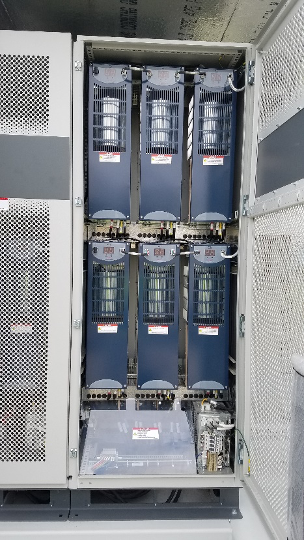 Electrical cable manufacture often requires cable to be supplied in long continuous lengths and for products such as submarine cables the required length can be 20 kilometers or more per cable drum. Many electrical cables have multiple layers of protection, but most have a requirement for a continuous and consistent outer coating made of extruded plastic compounds. The same constraints apply to the production of fiber optic and telecommunication cables which also have outer layers of extruded plastic. If the extrusion process is interrupted for any reason, there are substantial costs as “short lengths” are often dismissed as unusable by customers and have to be sold at steep discounts or scrapped. A primary cause of such production interruptions are voltage sags. A drop in voltage of 15% for a small fraction of a second can cause the variable speed drives used in the extrusion processes to stop. A Global cable manufacturer suffered from frequent very costly unplanned stoppages

The Company installed power quality analyzers and worked with their local electrical utility to acquire data. They determined that almost all of the events were due to voltage sags and there was very little actual loss of power. Omniverter analyzed the data and learnt from the customer that a solution should provide continuous voltage correction and voltage phase balance to keep the voltage in as tight a tolerance as possible to optimize their production runs.

The customer needed a solution for a particularly critical production line so Omniverter proposed an Active Voltage Conditioner (AVC) with maintenance bypass switchgear designed to protect just this one line. The AVC not only corrects voltage sags but if the voltage varies within a +/- 10% range it continuously corrects the voltage to +/- 1% which greatly reduces electrical stress on the production equipment The AVC and the bypass switchgear which is supplied with power quality analyzers was installed inside one of the Company’s electrical rooms.

The Company has stated that the AVC greatly improved the consistency of their production process and reduced wastage and downtime. In addition it reduced electrical maintenance costs as there were fewer premature failures of electrical and electronic equipment. The company declined to share detailed financial data on the payback period but have since purchased two more similar AVC units for other production lines in the same facility

Do you have a continuous production line which cannot tolerate unplanned stoppages?. These could be caused by poor electrical power quality. Omniverter will analyze your data for FREE and help you find a solution.