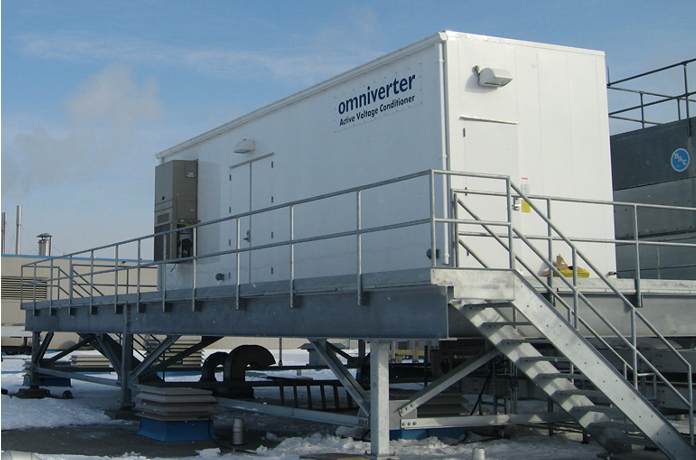 A major Canadian pharmaceutical company was experiencing frequent unplanned production stoppages which their management believed to be the result of poor electrical power quality. In the Pharmaceutical industry compressors and fans fed from variable speed drives (VSD) are essential to maintain positive air pressure, which is needed to reduce any contamination. Health rules (FDA) mandate that if an unplanned production stoppage occurs then products on the line must be scrapped, equipment must be cleaned and resterilised before production can resume.

The company had installed several power quality monitors throughout its facility, so it had several years of data on the electrical supply power quality. The plant is supplied at medium voltage 27.6kV to a transformer located inside the building which supplies an operational voltage of 600V to production areas. Omniverter was invited to help the company find a suitable solution to correct the voltage sags and improve production. Analysis of the data showed that over a 5 year period there had been only one power outage but many voltage sags. Omniverter was able to calculate the depth of voltage sags that cause a production stoppage.

After discussions with the company, Omniverter recommended a 5MVA 600V Active Voltage Conditioner (AVC). The AVC is mounted in line between the 600V transformer output terminals and the input terminals to the building loads. There was no available space within the building to accommodate the AVC and its bypass switchgear. Company management determined that there was no suitable available exterior ground space and requested that an outdoor solution be created which could be mounted on the roof of their four storey building. Omniverter proposed a design based on a thermally insulated, air conditioned, special purpose, steel building with walk-in access. The building was designed to include the 5MVA AVC, the 5000A bypass switchgear complete with power quality metering and to provided cable access from underneath the building. It was equipped with internal and external lighting and electrical power receptacles and internal fire alarm system. The heating and cooling systems were designed for external temperatures which can vary from over 40C in summer to below -30C in winter. The Pharma company retained mechanical and structural engineers to evaluate structural changes needed to the building to support such a structure which was over 30ft long and weighed some 66,000lbs. Company management approved the project and started work to reinforce the existing structure which needed new support pillars. The company also appointed an electrical contractor who had to work closely with Omniverter to determine exact locations for input and output cable bus. Omniverter’s subcontractors competed installation of the electrical equipment inside the steel outdoor building and the whole system was approved by external inspectors to meet cUL requirements. It was delivered to site in mid-December to meet a date on which a very large mobile crane, hired by the company, was due, so that the complete assembly could be placed in place on its support gantry on the roof. Despite very cold temperatures and wind gusts, the lift and placement were successful. The electrical contractor installed the cable ducts and connected these to the Omniverter building and all on site checks were done by late February. A firm date for connection to the whole pharmaceutical building was set with production management.

In its first 6 weeks of operation the AVC corrected 42 voltage sag events which would have caused production stoppages based on the company’s historic data Company management subsequently informed Omniverter that the complete installation had paid for itself in less than 3 months, including the cost of strengthening the existing building and all contractor costs. Following the success on this site the company has since ordered and installed a further similar outdoor AVC unit on a different production site

Do you have critical production where an unplanned stoppage can be very expensive? For FREE analysis of your power quality data Please call Omniverter. We will help you find a solution.